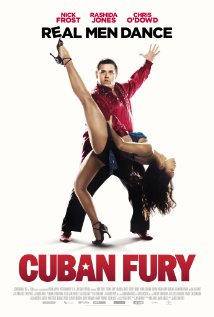 Not recommended under 13, PG to 15(Sexual references).

As a 13 year old, Bruce Garrett (Ben Radcliffe) and his sister Sam (Isabella Steinbarth) were winning awards around the country for their Salsa dancing skills and were about to tackle the national championships when Bruce was viciously attacked by a gang of bullies which put an end to his hopes of a dancing career.
22 years later, Bruce (Nick Frost) is now working in a mundane office job with a colleague Drew (Chris O’Dowd) who is a real lowlife. Things pick up at work when Julia (Rashida Jones) a new attractive, female boss arrives. Bruce is instantly attracted to Julia, but unfortunately for him, Drew is determined to ‘have her’ first. Bruce discovers that Julia is a Salsa dancer and he sees this as an opportunity to win her over. Firstly though, he has to not only radically brush up on his Salsa skills, which he does with the encouragement of his sister (Olivia Colman) and former tough tutor Ron Parfait (Ian McShane), but also overcome his fear of being humiliated.

Other than the above-mentioned violent scenes, there are no visually scary scenes in this movie that could scare or disturb children under the age of five.

Other than the above-mentioned violent scenes and scary visual images, there are no visually scary scenes that could scare or disturb children aged five to eight.

Cuban Fury is a British comedy with a difference. The Salsa dancing is great to watch but the characters are very stereotypical and the story is predictable. It will however, appeal to teens and adults but due to its content is not suitable for younger children.

The main messages from this movie are to follow your dreams and to be undeterred by what others think of you.