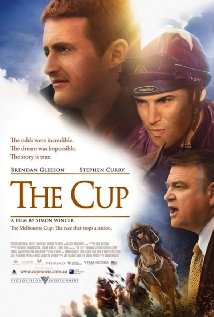 Not recommended under 10, PG to 13 (lacks interest for younger children; Disturbing scenes and themes)

The title of this film refers to the Melbourne Cup and the film tells the story of the young Australian jockey Damien Oliver. The film opens at a presentation dinner where we find Damien Oliver (Stephen Curry) being given the Jockey of the Year award and informing the surprised audience that he would now be riding for the Irish trainer Dermot Weld (Brendan Gleeson). From this point on the film is series of interwoven stories that portray the events and people surrounding Damien Oliver’s turbulent life in the weeks leading up to the 2002 Melbourne Cup.

The Cup contains no person-to-person violence of concern, but does contain scenes of horse racing injury and death which may be distressing to children and are described below under “Material that may scare or disturb children”

There are a number of scenes in this movie that could scare or disturb children under the age of five, including the following:

There is some occasional alcohol use in this movie. Examples include:

There is some infrequent low-level coarse language and name calling in this movie. Examples include:

The Cup is an emotionally charged drama targeting an adult audience, particularly those with a love for horse racing and interest in the Melbourne Cup. It lacks interest for children and contains distressing scenes of injury and death.

The main message from this movie is that being a champion isn’t just about winning, but about persevering regardless of adversity.

Friendship and perseverance through adversity: With the help of family and friends and a strong will and determination Damien was able to persevere through great emotional adversity.

This movie could also give parents the opportunity to discuss the life of a jockey and the consequences of participating in the dangerous and demanding sport of horse racing.