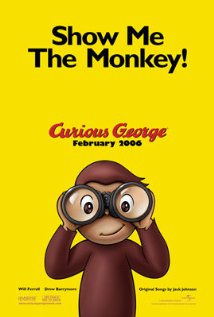 Okay for all ages, most suited to preschoolers.

Ted (Will Ferrell), a cautious historian, loves working at Mr. Bloomsberry’s museum, where every week he gets to bore a group of schoolchildren with his anecdotes from the past while their teacher Miss Maggie Dunlop (Drew Barrymore) adoringly hangs on every word. Ted is devastated when he learns that Mr. Bloomsberry (Dick Van Dyke) may have to close the Museum for financial reasons. Desperate to save it from being turned into a parking garage at the insistence of Junior Bloomsberry (David Cross), Ted inadvertently volunteers to lead an expedition to Africa in search of a lost idol.

While what he finds is not exactly what he is looking for, Ted nevertheless does not return empty handed. He is accompanied by a curious little monkey (Frank Welker), later named George, who has stowed away on the ship after being infatuated by Ted’s yellow hat. While George means well, his curiosity often gets the better of him and lands him, or rather Ted, in one difficult situation after another.

The burly doorman in Ted’s building blasts through doors a number of times. He roughly evicts Ted from the building.

In addition to the above-mentioned violent scene, scenes which could scare or disturb children under the age of five, include:

Children in this age group may also be scared or disturbed by the above mentioned scenes.

It is unlikely that children over the age of thirteen would be disturbed by anything in this movie.

There is no coarse language; however Ted at one stage refers to himself as an idiot.

The main message of Curious George is that with effort, persistence and honesty your dreams can come true no matter who or what you are.

Parents could also discuss with their children the importance of discussing feelings rather than acting out of jealousy or anger, and that being too curious can sometimes have unfortunate consequences.