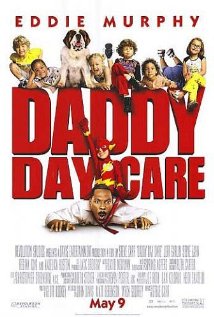 Charlie is an advertising executive and father of Ben aged four. Charlie suddenly finds himself without a job. His wife had previously decided to return to work as a lawyer and they had enrolled Ben in an exclusive, ridiculously expensive child care centre where everyone wears a uniform including the employees. Children are rigidly disciplined and are taught languages and martial arts, amongst other subjects, under the strict rule of Miss Harridan. After weeks of unsuccessfully trying to find another job, Charlie, while watching Ben playing in a playground with other children, hears one of the mothers casually remark on the need for a day care centre as an alternative to currently available preschools in the area. Charlie decides to open his own Daddy Day Care centre with his friend Phil who was also retrenched.

Daddy Day Care is at first a disaster as Charlie and Phil have little to no idea about how to look after young children with chaos and much hilarity reigning for the first few days. However as things settle down, more children start to come to the centre and Charlie realises that it isn’t enough to just ‘mind’ the children and that they need organised activities in a playful environment to make the care centre worthwhile.

Meanwhile Miss Harridan is losing pupils and so gets the authorities involved to try and close the Daddy Day Care Centre. This in fact has the opposite effect as Charlie and Phil, continue to improve the centre to meet the required standards. Daddy Day Care has to move into larger premises and becomes a centre where children can play and have fun while learning at the same time much to the chagrin of Miss Harridan. This is when Charlie’s old boss rings up to offer him his old job back at an increased salary and Charlie has to decide what is more important to him: the money or looking after the children.

There is quite a bit of slapstick violence in this movie including the following:

There is nothing in this movie that would scare young children, although parents may like to note two scenes that could cause concern in some children. In one scene, when Ben’s parents are looking for a cheaper child care centre, they are taken by an elderly couple around to the back of the house and the old man opens the cellar door implying that the children are kept shut in the cellar. In another scene, one of the children’s pets, a tarantula, escapes and it appears on Phil’s head. This could be quite scary for children who are afraid of spiders.

Children in this age group may also be disturbed be the above-mentioned scenes.

There is nothing in this movie that would scare older children.

There is nothing in this movie that would scare children in this age group.

A female child care worker is shown with a cigarette dangling out of her mouth.

There is no coarse language, although there is the occasional ‘Oh my God’.

The take home message in this movie is that children need a happy, caring, organised fun environment to learn and grow in, not a highly controlled, regimented one.

There are quite a few examples of behaviour that parents may wish to discourage such as: