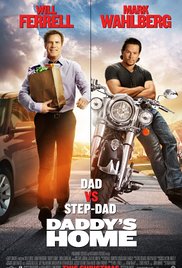 Not recommended for under 15; suitable for 15 and over (violence, crude humour and adult themes).

Daddy’s Home is a slapstick comedy which follows Brad (Will Ferrell), a modest radio executive who strives to become the best step-father to his wife Sarah’s (Linda Cardellini) two young children, Dylan (Owen Vaccaro) and Megan (Scarlett Estevez). Despite the two kids not being very accepting of him, Brad thoroughly enjoys being a stepfather, and dedicates considerable time to volunteering at the children’s school, church and scout programs.

The children’s biological father Dusty (Mark Wahlberg) calls one day and discovers that his ex-partner has remarried, and proceeds to catch a flight over to meet the new man in his kids’ lives. Dusty is young, attractive and rides a motorcycle – and represents everything that Brad is not. Although the two men are polite to each other at first, Brad grows increasingly insecure and feels as though he cannot compete with Dusty.

There is considerable slapstick-style violence within the film, including:

There are considerable sexual references, including:

There is mild nudity, including:

There is considerable coarse language in the film, including:

Daddy’s Home is a comedy that explores issues of blended families and step-parenting. The movie highlights the insecurities that new parents or step-parents can face in regards to the responsibilities of having children, as well as the daunting nature of competing with an existing parent. However, it demonstrates that it is possible for parents and step-parents to work together, as well as learn from one another. The movie highlights that there is no single best way to parent, and that having decent motivations and always trying your hardest to do the right thing are the main qualities that define good parenting.