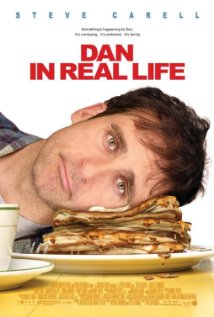 Dan (Steve Carell) is a widower, the father of 3 daughters and author of a regular parenting advice column for local newspaper. While giving out parenting advice, Dan struggles in his dealings with his own children;  his eldest daughter Jane who wants to practise her driving, his petulant middle daughter Carla who has a new boyfriend and his youngest daughter Lily who is growing up fast.

In an atmosphere of family discord, Dan and the girls set off to Rhode Island for the annual family get together organised by his parents’(John Mahoney and Dianne Wiest). While running errands for the family, Dan meets Marie (Juliette Binoche) in the local bookshop. They have an immediate connection and, on returning to the family house, Dan reveals his good fortune to his brothers and sister. However when Dan’s brother Mitch (Dane Cook), introduces his new girlfriend to the family, Dan is dismayed to find that she happens to be Marie.

For the remainder of the holiday weekend, Dan is in agony as he becomes increasingly infatuated with Marie. His parents notice his strange behaviour and thinking he’s lonely, arrange a blind date for him. Mitch suggests double date, and the events of the evening give Dan hope that Marie also likes him. As they begin to lose control of how they feel about each other and Dan’s problems with his daughters increase, the situation escalates into a very public family crisis.

Family relationships; Grief and loss following the death of a wife and mother

In addition to the above-mentioned violent scenes and scary visual images, there are some scenes in this movie that could scare or disturb children below five, including the following:

Some children in this age group may also be disturbed by the fact that the girls have lost their mother.

Dan in Real Life is a romantic comedy which is likely to be enjoyed by adolescents and adults. Young children may find the wordy dialogue, gentle pace and focus on family lack interest.
Values in this movie that parents may wish to reinforce with their children include:

This movie could also give parents the opportunity to discuss with their children attitudes and behaviours such as: