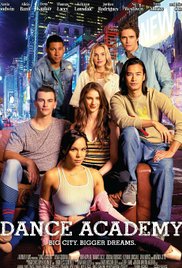 Not recommended under 12; parental guidance recommended 12 to 14 due to themes and disturbing scenes.

Dance Academy: The Movie is a follow-on from the 2010-2013 Australian TV series Dance Academy. In the original series lead character Tara Webster (Xenia Goodwin) was destined to become one of the great dancers of her generation until she slipped during her final performance and broke her back. It has now been eighteen months since her fall and Tara and her friends from the academy Christian (Jordan Rodrigus), Abigall (Dena Kaplan), Ben (Thomas Lacey), Kat (Alicia Banit) and Ollie (Keiynan Lonsdale) have moved on.

Tara is now all but recovered and is about to sue the Sydney Dance Academy for a million dollars’ compensation. However, she still dreams of being a dancer and when she is told by the Academy director Madeline Monour (Miranda Otto) that she still has potential and should follow her dream, Tara drops her compensation claim and applies to audition for a place in the Academy’s next production. When she is not successful, she becomes obsessed with proving the Academy wrong.

Tara now moves to New York where she hopes to join the New York Dance Academy. She endures many trials and pushes herself to the edge in her attempt to achieve her goal, resulting in some severe consequences for both Tara and her friends. In the end Tara realises that she has been chasing the wrong dream for the wrong reasons and makes some unexpected decisions.

Younger children in this age group may also be upset by some of the above-mentioned scenes, particularly Tara’s injury and the young man with cancer

Most viewers in this age group are unlikely to be disturbed by anything in this film.

Dance Academy: The movie is based upon the award-winning ABC TV series of the same name and is likely to appeal to teenage dance fans and followers of the original TV series. Because of some intense themes and scenes of injury and terminal illness, the film is not recommended for children under 12 and parental guidance is recommended for the 12 to 14 age group.