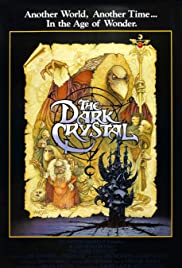 Not suitable under 8; parental guidance to 11 (violence, scary scenes and themes)

A young Gelfling named Jen (voiced by Stephen Garlick) is charged with the task of restoring order to a dying world ruled by the evil Skeksis. The leader of the Mystics, who raised him after all his people were killed by the Garthim (the dark, crab-like, army belonging to the Skeksis), tells Jen that he must find the oracle Aughra (voice of Billie Whitelaw) and a missing shard of crystal. With little idea of where to go or what to do, Jen sets off to find Aughra who helps him find the crystal. No sooner has Jen located the shard, that he is attacked by the Garthim who have orders to kills him. Jen escapes into a terrible swamp-like forest where he meets Kira (voice of Lisa Maxwell), another orphaned Gelfling. Together they set off to fulfil a prophecy, help restore the shard to the crystal and bring peace to a world split apart.

The Dark Crystal is a puppet animated, fantasy film from the Henson studio. Highly acclaimed for its time, it was originally marketed as a family film but due to the dark nature of much of the content is best suited to families with older children.

The main messages from this movie are to follow your destiny, to believe in yourself, to remember that there are always two sides to every story and that ultimately, good will prevail.