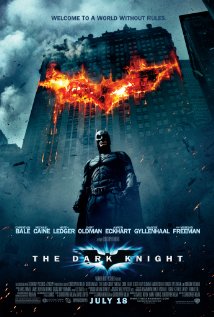 Not suitable under 13, not recommended 13-15 (Violence, disturbing scenes and themes).

The Dark Knight is set a year after Batman Begins, and opens with the Joker (Heath Ledger) and his band of villains successfully robbing a bank with the Joker eliminating his accomplices one by one in the process. Following the film’s introduction, we find that Batman/Bruce Wayne (Christian Bale) together with Lt. James Gordon (Gary Oldman) and District Attorney Harvey Dent (Aaron Eckhart) have formed an alliance, and have a plan in place to capture the Mob’s money deposits. However, a Chinese Mobster called Lau (Chin Han) foils Batman’s plans by making the money disappear with Lau escaping to Hong Kong.
The Joker re-enters the story promising a consortium of Mob bosses headed by Salvatore Maroni (Eric Roberts) to recover their money and get rid of Batman in return for half of the Mob’s money. The Joker then unleashes a reign of terror and chaos which includes killing Commissioner Gillian (Colin McFarlane), and a Gotham Judge, making an attempt on the lives of Lt. Gordon and Bruce Wayne and capturing Rachel Dawes (Maggie Gyllenhaal), Bruce Wayne’s ex-girlfriend, and Harvey Dent.

The Dark Knight contains brutal violence enacted against men, women and children, and while only minimal blood and gore is depicted, this violence is very disturbing and has considerable impact. The Joker is presented as a psychotic and nihilistic agent of chaos. Examples include:

In addition to the above-mentioned violent scenes, there are several images likely to scare and disturbing children under the age of five including the following:

Children in this age group and some adults may also be disturbed by some of the scenes described above.

The Dark Knight is a dark and disturbing action thriller. The film’s visual effects are superb and Heath Ledger provides a performance that makes the Joker appear believable and disturbing. However, even some adults may find some of the film’s content disturbing and it is definitely not suitable for children and many younger adolescents.
Values in this movie that parents may wish to reinforce with older adolescents include self-sacrifice and perseverance.