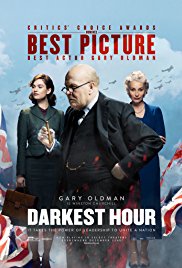 Not recommended under 12, parental guidance recommended 12 to 14, due to themes, lack of interest and some scenes that might disturb children.

Set in 1940, Darkest Hour tells the story of Winston Churchill’s (Gary Oldman) position as Prime Minister of Britain and head of the war cabinet during the early stages of WW11. Britain’s position was becoming increasingly weak under the leadership of Neville Chamberlain (Ronald Pickup) while the Germans were becoming increasingly more powerful. The opposition Labour Party refused to form a coalition with the Conservatives under Chamberlain and the only man they would accept was Churchill.

Churchill stood alone in wanting to fight the Nazis and was under great pressure from Chamberlain and Lord Halifax (Stephen Dilane) to enter into peace negotiations through  Mussolini. He had the support of his wife Clemmie (Kristin Scott Thomas), his extremely patient new secretary Elizabeth Layton (Lily James) and, later on, King George V1 (Ben Mendelsohn).  The British people were also behind him. At the time Churchill took over, 300,000 of Britain’s forces were stationed in Dunkirk and their total elimination by the Germans was imminent. Churchill took the controversial tactic of sacrificing 4,000 men in an unwinnable attack in Calais as a diversion and managed to save most of the men in Dunkirk. This cemented Churchill’s position and he went on to lead Britain to a great victory over Hitler.

Soldiers are seen in a field hospital injured and attached to drips. A dead soldier is shown in close up with his eye open and staring.

Children in this age group may be disturbed by the situation of the men who were sacrificed in an unwinnable attack on Calais to create a diversion so that the Dunkirk evacuation could take place.

There is mention of the fact that Churchill’s father ‘lost his mind to syphilis’.

No nudity as such but Churchill does warn Elizabeth that he is coming out of the bath naked and she runs and hides – only his legs are shown.

There is frequent use of substances in this movie, including:

Darkest Hour is a political drama about the time when Churchill took over office during World War 11. It portrays Churchill as a man of great courage and oratory skill, while also wrestling with some inner doubts. The movie focuses on the man and the political manoeuvrings that went on at the time and there is little action shown. For this reason, the fact that it is about the war, and its length of 125 minutes, the film will appeal more to adolescents and adults than younger children who are likely to lose interest. There are also some scenes that might scare young children.

The main messages from this movie are to stand up for what you believe in against all odds and to fight a perceived evil at all costs.

This movie could also give parents the opportunity to discuss with their children what might have been the outcome if Britain had gone down the path of making peace with Hitler.