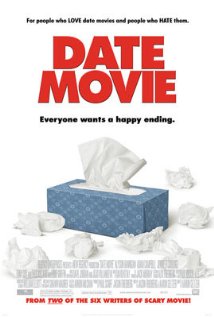 Not recommended under 15 (Sex. Theme)

Julia Jones (Alyson Hannigan), a 300 pound Greek-Jewish-Japanese-Indian-American girl is a hopeless romantic, who has been desperate and dateless for far too long. Frustrated with her self image, Julia enlists the assistance of Hitch the date doctor (Tony Cox), and after an Extreme Makeover is transform into a true beauty. Julia appears on a TV dating game (Extreme Bachelor: Desperate Edition) and wins a date with Grant Funkyerdoder (Adam Campbell).

After a whirlwind romance the smitten couple become engaged, and while Julia is welcomed into the family by Grant’s parents, the liberal minded Bernie and Roz Funkyerdoder (Fred Willard & Jennifer Coolidge), Grant is shunned by Julia’s father Frank Jones (Eddie Griffin), who believes Julia should marry a Greek-Jewish-Indian-American boy. The relationship between Julia and Grant is further strained with the arrival of Grant’s ex-girlfriend Andy (Sophie Monk), who has every intention of stopping the wedding and winning back Grant for herself. Unfortunately for Andy, all of her plots to discredit Julia fail and the day of the wedding finally arrives with Julia and Grant still firmly committed to each other. However, when Julia arrives late for her own wedding she finds Andy passionately kissing Grant in front of the church, and thinking the worst, storms off determined never to see Grant again.

The passing of several months sees Julia again at the altar, prepared to marry the good Greek-Jewish-Japanese-American boy picked out by her father. Before the marriage ceremony is over, however, events take an unexpected turn.

Date Movie contains occasional acts of violence, generally set in a comic context, but often quite brutal, including:

While set in a comic context, the violence depicted throughout the film, as described above, could scare younger children.

While set in a comic context, the violence depicted throughout the film, as described above, could scare younger children.

While set in a comic context, the violence in the film is quite brutal, and may scare children.

Children closer to the age of fifteen years will be more able to interpret the comic context of the violence, but could still be negatively influenced by it.

Some alcohol consumption in a restaurant.

There is also much crude humour used including:

Date Movie is a spoof or parody of romantic comedies and as such, does not contain any meaningful take-home messages. Parents may wish to question and discuss the manner in which the film places such an importance on physical appearance and sensuality, and the depiction of Andy as a person who uses, or abuses her sensuality to influence or for personal gain.