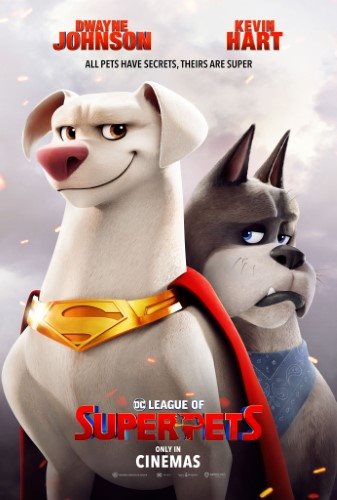 Not suitable under 8; parental guidance to 10 (violence and scary scenes)

Krypto (voice of Dwayne Johnson), the super dog, has been Superman’s (John Krasinski) best friend since he was sent to Earth with him as a baby. Krypto joins Superman on all his missions to fight crime in Metropolis. However, Krypto is feeling threatened by Superman’s relationship with Lois Lane (Olivia Wilde), as the two have become very close. Meanwhile, Metropolis is under threat from the evil Lex Luthor (Marc Maron), who is intent on destroying it. This time it’s Luthor’s laboratory experiment, a trained guinea pig called Lulu (Kate McKinnon), who has become the main threat. Lulu has managed to obtain a source of orange kryptonite that gives super powers to pets, which, together with her training, turns her into an evil monster. Lulu, with her band of followers, manages to capture Superman and all of the superheroes who have come to his aid. It is now up to Krypto to save his best friend and Metropolis itself.

There is a lot of violence in this movie, some of it done for laughs, and includes a lot of explosions, punches, fighting, crashes etc, in which no-one gets seriously hurt. Some examples include:

DC League of Super-Pets is an animated, superhero, comic movie that is fast-paced and action-packed. The movie is full of violence, which is in comic style so no-one actually gets hurt but some characters do appear injured or even dead at some points. There are also a couple of quite scary scenes. In addition, some of the jokes are adult in nature, though likely to go over the heads of children. For these reasons, the movie is not suitable for children under 8 and parental guidance is recommended for children aged 8 to 10.

The main messages from this movie are that it is not super powers that make you a hero; and that love means putting the needs others before your own.