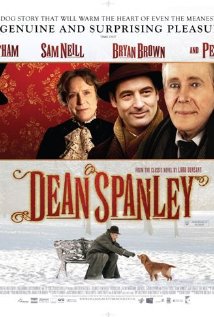 Not recommended under 5 (Violence) Lacks interest under 13

Fisk Junior (Jeremy Northam) spends every Thursday trying to connect with his elderly, insensitive father Fisk Senior (Peter O’Toole). It is on one such Thursday that a chance encounter at a seminar about reincarnation leads to an unlikely acquaintance between Fisk Junior, Wrather (Bryan Brown) an adventurous scallywag and the religious Dean Spanley (Sam Neill) who happens to believe, under the influence of alcohol, that he used to be a dog. Over a series of dinners and conversations with the Dean, Fisk learns far more about reincarnation than he bargained for and in the process is able to help heal his father’s wounded heart

Apart from the scenes described above, there is nothing in this film which is likely to disturb children under five.

Apart from the scenes described above, there is nothing in this film which is likely to disturb children under eight.

Dean Spanley is an interesting drama, containing frequent, subtle humour that is likely to appeal to adults and older teenagers. Most children under 13 are unlikely to be interested in the film because of the lack of action and constant conversation or narration.