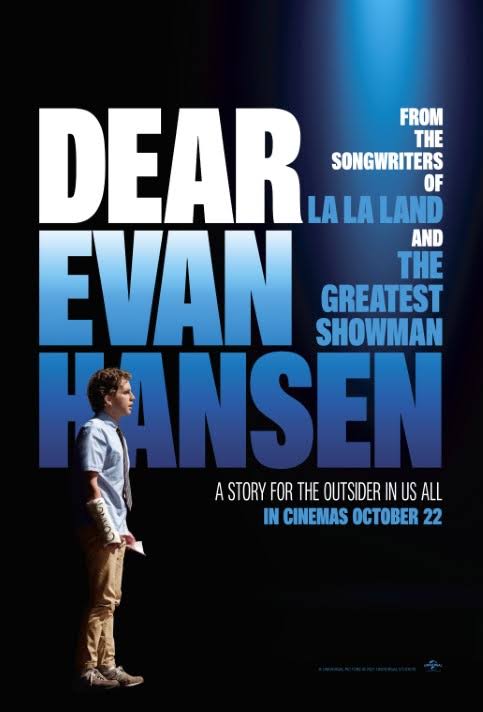 Overpowered by feelings of worthlessness and riddled with anxiety, Evan Hansen (Ben Platt) stands at the window looking out at a world he longs to be a part of but doesn’t feel he belongs in. Evan takes his meds and follows the advice of his therapist, writing a letter to himself, but his classmate Connor (Colton Ryan), who is dealing with his own demons, takes the letter from him and disappears. Evan is beside himself with worry, waiting for the moment when it is published online and there is ridicule and backlash. Instead, Connor’s mum (Amy Adams) gives the letter back to Evan, thinking these were the last words her son wrote before taking his own life. When she invites Evan to have dinner with her husband (Danny Pino) and Conner’s sister Zoe (Kaitlin Dever), Evan is determined to tell her the truth. Blindsided by the depth of their grief and despair, Evan can’t bear to destroy the happiness his letter seems to have brought them and instead weaves them a story of hope. He tells them about a wonderful day he shared with Connor, the kind of day he always imagined having with a friend and the kind of day his family had only ever hoped that Connor would have. Evan’s made up recollections help Connor’s family keep his memory alive and when Evan speaks at Connor’s memorial his words go viral. Soon projects are launched in Connor’s name, students come together and Connor’s family begins to heal, bolstered by the love and support that seems to surround their son. Evan can hardly believe how his life has changed: he is popular, admired and appreciated; when once he was invisible people now seek him out and wave to him in the hall; he and Zoe appear to be falling in love; and The Connor Project is well on its way to reaching the financial target to restore an orchard that Connor loved. Everything seems perfect and then the original letter Evan wrote to himself is leaked online and the backlash becomes unimaginable. Broken and devastated, Evan faces the impossible. He holds on, he keeps going and despite his mistakes and difficulties he continues to inspire others, reminding them that even in the shadows no one is truly alone.

Dear Evan Hansen is a stage to screen adaptation of the Tony Award winning musical drama. With a powerful cast, inspirational performances and timely messages that are important for us all to remember, this is a story that will touch your heart. Due largely to the themes it contains, this is not a family film but rather one that is best suited to older teens, mature audiences and fans of musical theatre.