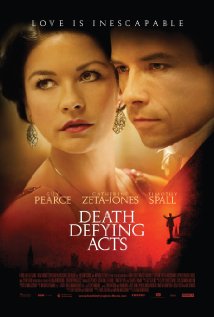 Not recommended under 13, Parental guidance to 15 due to themes and sexual references.

The story is set in the Scottish town of Edinburgh, during the last leg of the great escapologist Houdini’s, 1926 world tour.  Mary McGarvie (Catherine Zeta-Jones) is a pseudo-psychic entertainer struggling to make ends meet for herself and her daughter, Benji (Saoirse Ronan), when she hears of a challenge put forth by Harry Houdini.  In the hope of contacting his late mother, Houdini offers a monetary reward of $10,000 to the psychic able to make contact with her and prove it by revealing her dying words to her son.  With the aid of her daughter, Benji, Mary sets out to con Houdini and claim the cash prize.

Mary’s plan is constrained by the intense attraction that Houdini develops towards her, and what follows is a tangled love affair between the two.

The supernatural; Use of a child for illegal activity

Some children of this age may also be disturbed or distressed by some of the scenes throughout the movie, as mentioned above, and require parental guidance and discussion.

There are a number of conversations between adults where subtle sexual references are made. These are unlikely to be understood by younger children.

There is infrequent use of mild course language and putdowns throughout this movie, including;

Death Defying Acts is a love story about striving for what you want. Values in this movie that parents may wish to reinforce with their children include determination and independence.