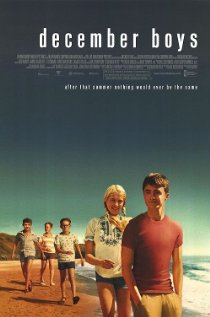 Not recommended under 10, PG to 15 (Themes, sexual references, language)

Based on the novel by Michael Noonan, December Boys tells the story of four orphans living in a Catholic convent in outback Australia who are sent to the seaside to stay with Bandy McAnsh (Jack Thompson) and his wife (Kris McQuade), for one summer. What is meant to be a simple holiday turns into a time that will define the boys forever. Maps (Daniel Radcliffe) learns some difficult lessons about life and love while exploring a relationship with Lucy (Teresa Palmer), a girl from down the coast. Sparks (Christian Byers), Misty (Lee Cormie) and Spit (James Fraser) spend the majority of their holiday striving to be the “most adoptable” when they learn that a childless couple Fearless (Sullivan Stapleton) and Teresa (Victoria Hill) are planning to adopt one of them. In the process the boys’ friendship is severely tested as they all try to overcome their longstanding issues with rejection. Ultimately their bonds of friendship and their enduring loyalties overcome their rivalry

Children over eight are unlikely to be scared by anything in this film.

Children over thirteen are unlikely to be scared by anything in this film.

December Boys is a coming-of-age drama which features beautiful scenery.  Because of its themes, it is best suited to older children and adults.

The main messages from this movie are that there is more than one way to realize a dream and that sometimes what you think you have always wanted may turn out to be something you didn’t realize you’ve always had.
Values in this movie that parents may wish to reinforce with their children include:

This movie could also give parents the opportunity to discuss the real-life consequences of early sexual experiences, drinking, smoking and stealing.