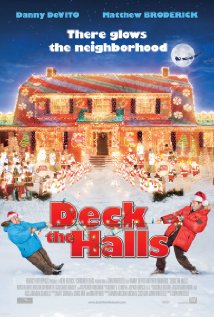 Steve (Matthew Broderick) and wife Kelly (Kristin Davis) Finch lead a nice, orderly life with their two adolescent children, 15 year old Madison (Alia Shawkat) and 10 year old Carter (Dylan Blue) in a nice, neat neighbourhood. However their order is seriously disrupted when new neighbours Buddy (Danny De Vito) and Tia (Kristin Chenoweth) Hall move in across the road with their twin, teenage daughters. It soon becomes very obvious that the Halls are the exact opposite of the Finches.

Buddy gets a job as a used car salesman as he’s very good at selling things, but he’s still trying to find his niche in life. As it’s approaching Christmas Buddy starts decorating his house with lights. This turns into an obsession when he decides he wants his house to be bright enough to be seen from space. The Finch family is naturally very put out about this, as not only is their sleep interrupted by the bright lights and accompanying loud music, but also because Steve has always been known in the town as “the Christmas Guy”.

What ensues is a fierce competition between Buddy and Steve while the remaining family members make friends. This doesn’t please Steve either as he doesn’t like the influence the Hall family is having on his children, whom he has reared very strictly. The Halls on the other hand, have looser moral standards, particularly when it comes to following the law. The lead up to Christmas becomes more and more tense until finally Kelly and Tia can’t take anymore and they have to move out to make their husbands see sense.

There is some slapstick violence in this movie including:

In addition to the above-mentioned violent scenes, there is one scene that could disturb children under the age of eight, in which Buddy mentions that, while moving into the house, he dropped a refrigerator on a cat.

Children in this age group may also be disturbed or scared by the scenes mentioned above.

Some drinking of alcohol at home and on the street.

Deck the Halls is a family Christmas movie that few will find amusing. It is full of stereotypes and lacks imagination. The movie is supposed to be about the true meaning of Christmas but is not convincing.

The movie portrays law abiding citizens as dull and boring while people who skirt around the law are seen to be funny and more likeable. Buddy commits several crimes which are presented as being funny and go unpunished: