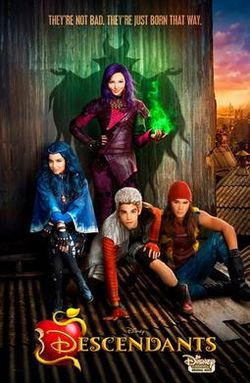 In the magical land of Auradon, everyone lives in peace and harmony under the reign of Belle (Keegan Connor Tracy) and Beast (Dan Payne). All of the villains, including Maleficent (Kristin Chenoweth), the Evil Queen (Kathy Najimy), Jafar (Maz Jobrani) and Cruella de Vil (Wendy Raquel Robinson) have been exiled to the Island of Livevil. The Royal couples' son, Prince Ben (Mitchell Hope), is about to ascend the throne and he decrees that the descendants of the villains should be allowed to enter Auradon to attend college and be given a chance to make good with their lives. Consequently Mal (Dove Cameron), Evie (Sofia Carson), Jay (Booboo Stewart) and Carlos (Cameron Boyce), the children of the four most notorious villains, are chosen to come to Auradon, much to the displeasure of some.

Maleficent sees this as her opportunity to retrieve the wand from the Fairy Godmother, through her daughter Mal. The four teenagers arrive with this as their main intention, however, during their time in Auradon they start to question who they are and who they want to be. Do they have to follow in their parents' footsteps or are they their own people with the ability to make their own choices? Will they choose good or evil? The fact that Ben and Mal fall for each other may also help to sway the choice.

Descendants is a Disney movie which includes many of its well-known fairy story characters, both good and bad. The movie is basically a teen college romance story but holds a lot of good messages. Older children and teens are likely to enjoy this movie.

The main messages from this movie are that redemption is possible; we are who we choose to be; people should be given a second chance; and good triumphs over evil.