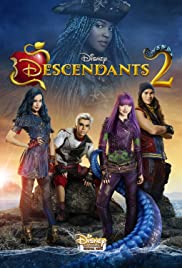 Not suitable under 8; parental guidance to 10 (violence, scary scenes and themes)

Descendants 2 starts with Mal (Dove Cameron) remembering her life in Livevil and feeling that she doesn't really belong in Auradon. She feels like a fake and when Ben (Mitchell Hope) exposes her cooking to be the result of a spell, Mal decides to return to the Isle of the Lost. There she finds that the Pirate Queen, Uma (China Anne McClain), together with the nasty character, Pirate Harry (Thomas Doherty), and their gang, have taken control of Mal's familiar area.

Evie (Sofia Carson) soon discovers that her friend is missing and tells Ben that she fears Mal has returned to the island. Evie, Ben, Jay (Booboo Stewart) and Carlos (Cameron Boyce) cross the sea to try and persuade Mal to return. However, Mal won't be deterred and Ben returns to the others quite crushed. While they plan what to do next, Ben is kidnapped by Pirate Harry and his gang. He is taken aboard the pirate ship and tied to a post. Mal, Evie, Jay and Carlos then must rescue Ben while fighting off the pirates. Mal has to again decide what is really important to her life.

Descendants 2 is the sequel to the first Disney teen romance movie. There is more singing and dancing in this one which is likely to appeal to teens. The fight scenes are choreographed which somewhat reduces the menacing behaviour. However, the movie does have some scary scenes which make it unsuitable for children under 8 and parental guidance is recommended for 8 – 10 year olds.

The main messages from this movie are that no-one is completely good or bad and that most people are a mixture of both. What's important is to decide which path is better to follow. Being true to oneself is also important.