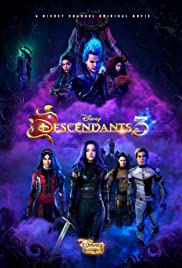 Not suitable under 8; parental guidance to 10 (violence, scary scenes and images)

In this made for TV movie sequel, Ben (Mitchell Hope) and Mal (Dove Cameron) continue their plan to bring more Villain Kids (VK's) over from the island to Auradon. They travel to the Isle of the Lost, together with Evie (Sophia Carson), Jay (Booboo Stewart) and Carlos (Cameron Boyce), where they select four lucky kids to go back with them, including Dizzy (Anna Cathcart), Celia (Jadah Marle) and twins Squeaky (Christian Convery) and Squirmy (Luke Roessler). However, as they are about to leave, Hades (Cheyenne Jackson) attempts to escape through the barrier just as it is closing. Mal has to transform into a dragon to repel Hades and seal the barrier.

Back in Auradon, Mal feels the responsibility of bringing evil to Auradon and so decides to close the barrier to the island permanently. This is without the knowledge of her friends who think she will always stand up for the VK's.

When Ben and Mal announce their engagement, Audrey (Sarah Jeffery) becomes most upset and angered. She feels she has been good all her life and for what purpose? Audrey decides to transform into a wicked queen, which she does by stealing Malificent's sceptre and crown. She then casts a spell on the inhabitants of Auradon putting them all into a deep sleep. Mal and her friends now have to fight Audrey's strong magic and the only weapon more powerful is Hades' amber. Mal decides to return to the island and try to steal the amber from Hades, who turns out to be her father. In the process Mal learns that all people are capable of good and evil no matter what side of the barrier they come from. She therefore decides it is better to remove the barriers that keep them apart and that everyone deserves a second chance.

Descendants 3 is the last movie in the trilogy with plenty of singing and dancing. However, it does have some dark themes, with Hades as a former god who steals souls and abandoned Mal as a baby, and some conflicting messages between good and evil. It also contains some quite scary scenes, therefore, is not recommended for children under 8 and parental guidance is recommended for children 8 – 10.

The main messages from this movie are that we are stronger together and that all people are capable of good and bad regardless of their background.