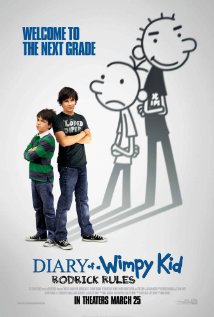 Not recommended under 6, PG to 13 (Themes; Crude humour)

Greg Heffley (Zachary Gordon) is the middle child. He has the cute little brother who is always getting him into trouble and an older brother Rodrick (Devon Bostick) who pushes him around. This year he is in 7th Grade and is no longer the new kid who some will be familiar with from in the first film in this series. There is a new girl in his class, Holly (Peyton List) who he really wants to ask out on a date although most of his friends and, of course, Rodrick think that she is out of his league.

Rodrick continues to make Greg’s life a misery until their mother (Rachael Harris) has had enough. She leaves them at home to work out their relationship rather than taking them away on a fun weekend, with the proviso from their father (Steve Zahn) that they are to have no visitors. Roderick disobeys and has a party and Greg later covers for him.

Rodrick and Greg now have a new bond, and finally they seem to be getting along. Unfortunately, their parents eventually find out about the party and then everything becomes worse than before as Rodrick blames Greg for their punishment. However Greg is eventually able to do something for Roderick that changes everything.

There is some product placement including

Include discussion of Greg’s crush on Holly.

There is some coarse language and crude humour in this movie, including:

Diary of a Wimpy Kid 2: Rodrick Rules is a comedy about family relationships especially those between siblings. Parents may be concerned about primary school aged children imitating parts of this film, including the teasing and bullying, the crude humour and the behaviour during the party.