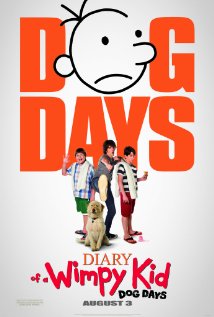 Not recommended under 6, PG 6-7 (Violence; Some crude humour)

Diary of a Wimpy Kid: Dog Days, based upon the popular graphic novel, is the story of Greg (Zachary Gordon) learning to navigate the dramas of middle school with his best friend Rowley (Robert Capron). With school out for the summer, Greg tries to occupy himself with a series of misguided adventures, attempting to gain the favour of the beautiful Holly (Peyton List) while convincing his father Frank (Steve Zahn) that he’s nothing but responsible.

There is limited violence and some accidental harm in this movie, including:

In addition to the above-mentioned violent scenes and scary visual images, there are some scenes in this movie that could disturb children aged five to eight, including the following:

Some mild sexual references include:

There is some partial and implied nudity in this movie, including:

Diary of a Wimpy Kid: Dog days is the latest film based on the series of popular books. It is a story about growing up and learning about the consequences of one’s actions. Despite only wanting to stay inside and play video games at the beginning of the summer, Greg learns that there is more to life – that relationships are crucial, and that you should strive for the things that you want. It is aimed at, and likely be enjoyed by, upper primary and young teenage children.