Diary of a Wimpy Kid: The long haul 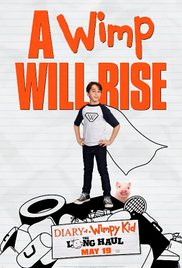 Parental guidance recommended under 8 due to scenes that might scare under fives, coarse language and crude humour.

Diary of a Wimpy Kid: The long haul is the fourth film in the series of movies based on the popular novels by author Jeff Kinney. It follows young Greg Heffley (Jason Drucker) who is frustrated at the thought of needing to spend time with his family over summer when he’d much prefer to be having fun with friends. However, his mother Alice (Alicia Silverstone) has organised a family road trip across the country in order to visit Greg’s great-grandmother for her birthday. Although Alice informs Greg that he will need to give up his phone and other technology for the trip, Greg tries his best to escape the clutches of his family in an effort to attend a nearby gaming convention.

A young child finds a bra in another’s suitcase

There is some mild coarse language in the film, including:

Diary of a Wimpy Kid: The long haul is the latest in this popular series based on the books of the same names. It is an enjoyable film that emphasises the importance of standing by one’s family and loved ones, even when the desire to do so is not always there. The film highlights the rewarding nature of family relationships when time and energy are invested into them, and additionally explores the notion that others are always capable of being surprising in what they can offer. There are a few scenes that might worry under-fives and parental guidance is recommended for children under 8 due to coarse language and crude humour.