Did you hear about the Morgans? 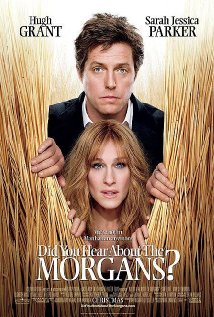 Not recommended under 8, PG to 13 (Violence, sexual references)

Meryl (Sarah Jessica Parker) and Paul Morgan (Hugh Grant) are recently separated. Paul had a one night stand on a conference and as a result Meryl no longer trusts him. They are now living separately. Paul is keen to get back together but Meryl is hesitating so he takes her out to dinner to tell her that he is sorry and ask if they can get back together. After dinner they go for a walk as Meryl needs to meet a client. When they get to the client’s house they witness his murder and also see the killer.

From this point onwards they are in danger. The killer needs to eliminate them as they are the only witnesses who can identify him, so the police put them into a witness protection program. This is a situation which they are very unhappy about, but unfortunately they have no choice.

They are flown to a little town in Wyoming called Ray, where they are forced to spend a week together in the care of Marshal Wheeler (Sam Elliot) and his wife Emma (Mary Steenburgen), the deputy. There are no distractions from work or friends or city escapes and as a result they start to talk.

Did you hear about the Morgans? is a comedy that focuses on the importance of good communication in a relationship.