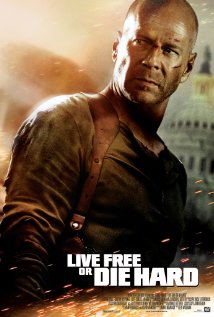 Not recommended under fifteen years of age (Violence, Themes, Language)

Die Hard 4.0 opens with Matthew Farrell (Justin Long), one time computer hacker, emailing a computer code to test a security system. As a result, a computer owned by another hacker explodes and the computers in the FBI command centre crash. The FBI immediately suspects computer hackers and takes steps to round up all known computer hackers for questioning.
Detective John McClane (Bruce Willis) receives a call instructing him to pick up Matthew Farrell and deliver him to the FBI. Detective McClane arrives at Farrell’s apartment, but before McClane and Farrell leave the apartment, Farrell is shot at and then attacked by a group of men wielding automatic guns. McClane is able to fight off the attackers and he and Farrell make their way to FBI head quarters. Computer systems all over the city begin to crash causing major city wide traffic jams, while Wall Street turns to chaos as the financial sector’s computers crash.  McClane and Farrell arrive at FBI headquarters, to discover that seven other computer hackers have been systematically assassinated.
Farrell deduces that the state’s electricity grid will be the next target and he and McClane find the facility already under attack. They manage to fight off the attackers but not before the state’s electricity grid is shut down. During the fight, McClane kills Mai Lihn (Maggie Q), a lethal killer and one of the major players behind the cyber terrorism. It is at this point that the mastermind behind the cyber terrorism is revealed to be Thomas Gabriel (Timothy Olyphant), a discredited former government computer security expert who now seeks revenge.
When Gabriel kidnaps McClane’s daughter Lucy (Mary Elizabeth Winstead) McClane’s focus changes from saving the country to saving his daughter, but he eventually does both.

Children may be particularly disturbed by the kidnapping and brutal treatment of Lucy and the killing of Mai Lihn.

Younger children in this age group are also likely to be disturbed by the above-mentioned scenes.

Die Hard 4.0 is an intense action thriller, containing frequent glamorised violence, which may appeal to fans of the previous films in the series. The film relies almost totally on breath-taking stunts to entertain and little time is spent on character development.
The main messages from this movie are that crime doesn’t pay and that good people, who are always in the right, will always win regardless of overwhelming odds. The film also contains a number of pro-American messages with references made to 9/11 and religious fanatics.
Values that parents may wish to reinforce with older children include selflessness and perseverance: