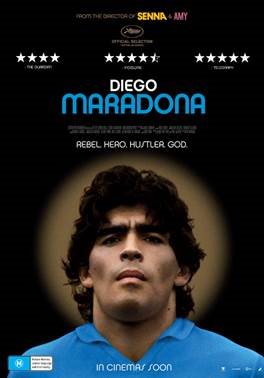 Diego Maradona tells the story of one of Argentina’s all-time greatest soccer players. Maradona’s journey is constructed using real and previously unseen footage; from his humble roots as an up and coming soccer player from a poor village, to his fall from grace as a cocaine-addicted sports superstar.

Diego Maradona is a Spanish-language documentary with English subtitles about the rise and fall of one of Argentina’s all-time greatest soccer players, Diego Maradona.  Beautifully constructed from previously unseen footage and images of Maradona, this film paints a poignant picture of the impact he has had on soccer and the country for which he played.  This film will likely entertain older audiences, and those with a particular interest in this sporting figure.  Given the length and mature themes and content, this film is inappropriate for children under 13.  Parental guidance is recommended to 15.

The main messages from this movie are that passion and motivation can lead to great accomplishments and that fame and public adoration can take a psychological toll on those who have them.