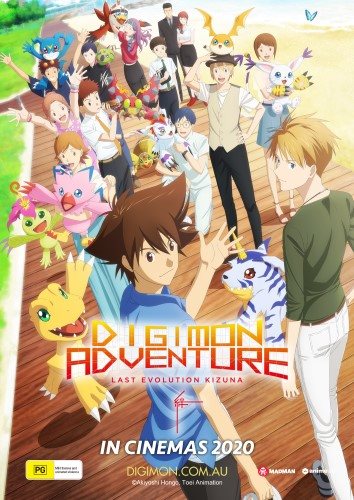 Not suitable under 12; parental guidance to 14 (violence, themes, complex plot)

This film is part of the Digimon Adventure franchise, which originated with a short film and television series in 1999 and grew to include several television series, computer games and films spinning off from the original. The basic premise follows a gang of seven children (the digidestined) who have stumbled into a digital alternate reality where they make friends with some ‘Digimon’ (digital monsters). They learn that their Digimon sidekicks can transform into fighting beasts that can combat other Digimon. This film, Digimon Adventure: Last Evolution Kizuna, takes us right up to when the gang are on the cusp of leaving their childhood behind them. Tai (voice of Joshua Seth) is now at university, but still feeling lost about what he is going to do with his future. The rest of the gang are starting out in different directions, but they still get together when needed to deal with rogue digi-monsters that infiltrate the real world. When a strange phenomenon occurs, with aurora borealis appearing in the skies and people falling into comas around the world, the gang get together to see what needs to be done. An enigmatic professor, Menoa Bellucci (voice of Erica Harlatcher), from the US arrives with her assistant and tells them about a new Digimon called Eosmon, who is apparently stealing consciousness from digidestined children around the world. Tai and his friends are enlisted to help fight Eosman and save the digidestined from this fate. The adventure takes a darker turn when they realise that as they age and enter adulthood, their ties with their Digimon are gradually weakened until they will no longer be connected. The more they battle Eosmon with their Digimon, the weaker and weaker their connection becomes. Not only is the world in peril, but Tai and his friends struggle to come to terms with growing up and losing their Digimon.

Digimon Adventure: Last Evolution Kizuna is a complex story that will appeal to fans of the Digimon world – In particular, those who may have grown up as fans of the original 1999 television series. The film jumps straight into the Digimon world without much explanation so it’s a bit difficult to follow if you haven’t watched any of the previous chapters. Although there is not a great deal that will scare children, there are a lot of monster vs monster fighting scenes and some elements and themes which are a little too mature for children under the age of 12. If your child is an avid Digimon fan, they are likely to find this film enjoyable as well as moving, portraying the inevitable loss of childhood innocence.

The main messages from this movie are that you cannot stay in childhood forever and that when you become an adult there are things you must leave behind.