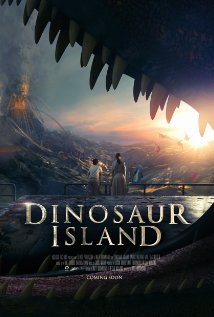 One day Lucas Winton (Darius Williams) discovers a mysterious crystal hidden away in his grandmother’s house. Later, when Lucas is on a plane on his way to visit his father, the crystal begins to act strangely and Lucas is magically transported to an unknown island full of dinosaurs.

On the island, Lucas meets a girl named Kate (Kate Rasmussen), who was stranded on the island in the 1950’s. The two of them must work together and use what they know about geology and dinosaurs to avoid being attacked and to find a way home.

Dinosaur Island is an entertaining action movie with dinosaurs on a mysterious island. It teaches children about the importance of working together and using your brain to solve problems. This movie is ideal for children over the age of 10. Because of the violent and scary scenes in the film, parental guidance is guidance is recommended for 7-10 years olds and this film is not recommended for children under the age of 7.