Disney Jr. at the Movies: Mickey and the Roadster Racers 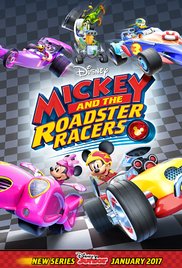 This film is best suited to children between the ages of 3-7. It may lack interest for children over the age of 8.

Disney Jr at the Movies: Mickey and the Roadster Racers is a collection of episodes rather than a feature film. The episodes take place in different locations and feature Mickey Mouse (voiced by Bret Iwan) and his friends Donald (voiced by Daniel Ross), Daisy (voiced by Tress MacNeille), Minnie (voiced by Russi Taylor) and Goofy (voiced by Bill Farmer) who all help each other overcome the challenges presented. In the first episode Pete (voiced by Jim Cummings) tries to take a special tyre. They must also deal with Pietro, Pete’s Italian counterpart, as he tries to sabotage Mickey and his friends to stop them and their fabulous, transforming, racecars from winning the Rigatoni Ribbon. In other episodes Minnie and Daisy are “Happy Helpers” trying to help various members of the community by pet-sitting and helping a new Italian friend by looking after his tour business for him while he recovers from a cold. In the middle of these episodes a story is told from the book of Once Upon a Time about a good dinosaur that gets lost, makes a friend and must find his way back home.

Mickey and the Roadster Racers is a compilation of episodes featuring Mickey and his friends with their transforming roadsters as they help each other overcome obstacles both on and off the racetrack.

The main messages from this movie are that good friends are worth their weight in gold and that if you work together and treat others kindly things will work out in the end.

This movie could also give parents the opportunity to discuss with their children the importance of road safety and that accidents and crashing cars can have destructive consequences, something that was not shown in the film.