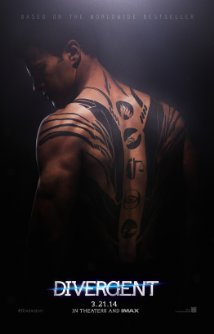 Not recommended under 15 due to themes and violence.

Divergent is a science fiction action film set in the dystopian Chicago of a future time. Society has been divided into five factions based on personality testing run by the government: Abnegation (selfless), Amity (peaceful), Candor (truthful), Erudite (intelligent) and Dauntless (brave). The film follows the story of Beatrice Prior (Shailene Woodley), a girl with a family heritage from Abnegation. After undergoing the personality testing, it is discovered that she does not fall clearly within any of the five categories – she is a ‘Divergent’, and is told that she will be hunted and killed if anyone discovers this. At the Choosing Ceremony, Beatrice elects to go against her family heritage and be a part of the Dauntless faction.

Changing her name to ‘Tris’, she struggles initially, but soon becomes one of the most fearless members of the faction. She quickly gains the respect of her instructor, Tobias (Theo James), and the two later develop a more intimate relationship. During the training, initiates are put through a range of physical tests in addition to psychological ones. When the psychological testing reveals that Tris is unlike the other initiates, Tobias encourages her to practice in an effort to conceal her powers as a Divergent.

However, when the Erudites drug the Dauntless soldiers and it is only Tobias and Tris who remain unaffected, the two are forced to abandon the secrecy which had protected them, standing up against a powerful faction and its leader Jeanine (Kate Winslet).

There is considerable violence in the film, including hand to hand fighting with knives and gun fights. Examples include:

Most of the film would be scary for this age group.

In addition to the above-mentioned violent scenes , there are some scenes in this movie that could scare or disturb children aged under five to eight, including the following:

Children in this age group may also be disturbed by the scenes involving the death of Tris’ parents and also:

There is some partial nudity and sexual activity in the film, including:

There is some use of coarse language in the film, including the terms:

Divergent is a science fiction action fantasy that centres on the concept of identity, and how individuals build their own unique identities against the pre-existing influences of family, relationships and their responsibilities to society. It is the first screen adaptation of author Veronica Roth's best-selling dystopian trilogy which many teens and some tweens may have read. The film begins with Tris having very little idea as to who she is as a person, and what she is capable of. The trials she goes through during the training within Dauntless enable her to discover that she is far braver and stronger than she could have ever imagined. The main message is that it is possible to achieve anything with enough determination and strength of character.

The film features frequent violence, is tense and scary and has themes that younger children may find difficult to understand. It is therefore not recommended for under 15s.