Dogtanian and the Three Muskehounds 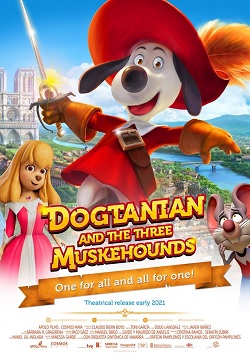 Parental guidance to 4 (themes and animated violence). May lack interest over 7.

In 1625 Dogtanian (voice of Tomas Ayuso) leaves his country home in France and sets off for Paris determined to join the Muskehounds and restore honour to his family name. Once in Paris he has an unfortunate run in with the man who framed his father and instead of being welcomed by The Muskehounds finds himself agreeing to three separate duels with the most famous Muskehounds of all: Athos (voice of Stephen Hughes), Porthos (voice of Stephen Hughes) and Aremis (voice of Julio Perillan). When the group is set upon by the cardinal’s guards they work as a team to defeat them. Dogtanian helps rescue Juliette (voice of Karina Piper) the trusted lady in waiting of Queen Anne (voice of Karina Piper).  He soon finds himself caught up in a plan to save the Queen’s diamond necklace and a fake letter from falling into the wrong hands and starting a war with England. The cardinal (voice of Stephen Hughes), trusted advisor of the King, bribes Pip (voice of Robbie K Jones) Dogtanian’s servant to inform him of every move the Muskehounds make while the evil cat Milady (voice of Elisabeth Gray) steals the necklace and ties, with help from the Cardinal and his guard, to stay one step ahead of them of the Muskehounds. When it looks like all is lost Dogtanian uses his skill with the sword in a final effort to bring back the necklace, save the royal marriage, thwart the cardinal’s sinister plans for war and save the kingdom of France.

There is some mild romantic activity in this movie, including:

There are some mild insults in this movie, including:

Dogtanian and the Three Muskehounds is an animated adventure based on a traditional retelling of The Three Musketeers. It features simple cinematography, a predictable plot and a dialogue that some adults may find painful to sit through. Younger children, the target audience, will likely enjoy it for the cute characters and sense of adventure it brings.

The main messages from this movie are to believe in yourself, to work together for the greater good and that, no matter the challenge, good will ultimately prevail.