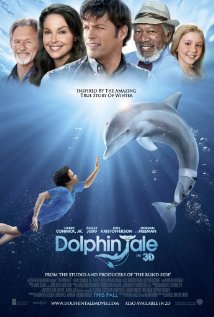 PG to 10 (Disturbing scenes and themes)

Sawyer Nelson (Nathan Gamble) is a quiet, gentle boy. He prefers making model aeroplanes and hanging out with his older cousin Kyle (Austin Stowell) to being with the other kids at school who make fun of him. He lives alone with his mother Lorraine (Ashley Judd) after his dad left them some years previously.

Sawyer is riding his bike to school one day when he hears a fisherman calling for help. He runs down to the shore where he finds a young dolphin washed up and tangled up in ropes. Sawyer cuts the ropes and stays talking to her while they wait for a rescue team. The dolphin is taken away to a Marine Aquarium where they name her Winter. Sawyer manages to get into the aquarium and finds that Winter is not doing very well. Her tail is badly damaged and she is refusing to feed. However, when she hears Sawyer’s voice she responds and lets him feed her from a bottle. Winter’s tail has to be amputated and her prognosis is not good but she overcomes her disability and manages to learn to swim.

Some months later it is discovered that Winter’s new way of swimming is damaging her spine, so against all odds Sawyer enlists the help of a prosthetic surgeon who devises a tail just for her. Winter’s determined spirit is an inspiration to all, not least to young Sawyer who gains much self-confidence through the experience.

In addition to the above mentioned violent scenes, there are some scenes in this movie that could scare or disturb children under five including the following:

Dolphin Tale is an inspirational family movie based on a true story and suited to most ages, although younger children could be distressed by scenes of the injured dolphin and people with prosthetic limbs. It has been released in both 3D and 2D versions, but the 3D effect does not seem to greatly enhance the film. The film is full of positive messages and role models.