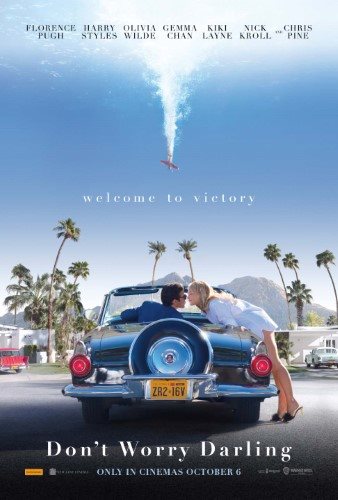 Not suitable under 14; not recommended under 15; parental guidance to 15 (violence, scary scenes, sex scenes, self-harm)

Jack (Harry Styles) and Alice (Florence Pugh) seemingly live an ideal life in an experimental model town called Victory. It is set during the 50’s in America, where all the men dutifully go off to work each morning, while their wives stay home and clean the house. Alice spends her day cleaning, vacuuming, washing etc., while listening to the encouraging words of Victory boss, Frank (Chris Pine), on the radio. The afternoons are spent with her neighbour and friend, Bunny (Olivia Wilde), along with the other wives, either doing ballet, shopping, or relaxing, drinking cocktails by the pool. By the time Jack returns home, dinner is prepared and Alice can’t wait to have sex with him.

No-one knows what secretive work their husbands do, and it is seen as an offence to bring the subject up. However, when Alice’s friend, Margaret (Kiki Layne), starts to question what’s going on, her life begins to unravel and she goes into a very dark place. At first, Alice tries to encourage Margaret but Alice too starts to question her reality. Alice finds herself increasingly suspicious of what is happening around her and when she eventually confronts Frank, her world falls apart.

Don’t Worry Darling is a psychological thriller that will keep you on the edge of your seats. The film has an interesting twist in the plot that is very 21st century. The fact that Harry Styles stars in this movie will attract young teenage girls, however, the film really isn’t suitable for this age group, particularly with one character committing suicide and another self-harming. It is therefore not suitable for children under 14 and not recommended for children under 15, and parental guidance is recommended for 15-year-olds.

The main message from this movie is, what would you give up to have a perfect life?