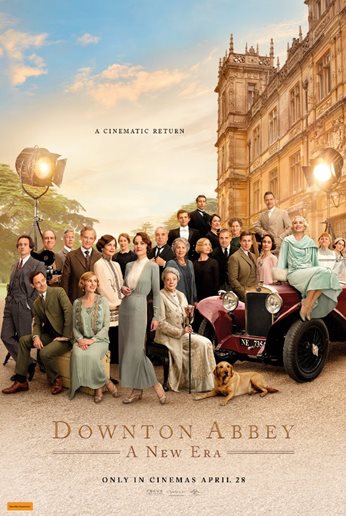 Not suitable under 8; parental guidance to 10 (themes, mild coarse language and sexual references). Likely to lack interest for most children under 15.

As Violet Grantham’s (Maggie Smith) health begins to rapidly decline and the family is told that the end is near, she discovers that a long lost love has left her a villa in the south of France. Knowing that her own grandchildren are well cared for financially, Violet decides to leave the villa to the great-grandchild who stands to inherit the least. While Robert (Hugh Bonneville) and Cora Grantham (Elizabeth McGovern), along with Lady Edith (Laura Carmichael), head to France to finalise the transfer of the property, Lady Mary (Michelle Dockery) stays at Downton Abbey to supervise the filming of a movie set upon its grounds. The servants all have high hopes of getting to know the famous actors, especially the legendary Guy Dexter (Dominic West) and beautiful Myrna Dalgleish (Laura Haddock). But sometimes meeting those you idolise is not all it’s cracked up to be. When a series of incidents threatens the production, Lady Mary and the rest of her household step in to save the day.

Downton Abbey: A New Era is a continuation of the story of the Grantham’s and those who touch their lives. The film contains historically accurate costumes, sets and dialogue and, along with being somewhat difficult for younger ones to follow, will lack interest for most children. The film will, instead, be best enjoyed by older, more mature audiences and fans of the original series.

The main messages from this movie are that young love is never forgotten; and that you must never forget who you are or where you’ve come from.