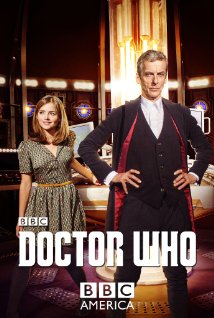 Not recommended under 10; parental guidance recommended 10-13 (violence and disturbing scenes)

The movie version of the first episode in the new Dr Who series opens with a Tyrannosaurus Rex appearing out of nowhere and rampaging through Victorian London. The Doctor’s companions from past sessions, Madame Vastra (Neve McIntosh), Jenny Flint (Catrin Stewart) and Strax (Dan Starkey), arrive on the scene to investigate. Suddenly the dinosaur coughs up a blue police box, out of which clambers a newly-regenerated and extremely disorientated Doctor (Peter Capaldi) and his current companion “The Impossible Girl” Clara Oswald (Jenna Coleman).  Also observing the dinosaur is a mysterious alien android (Peter Ferdinado). The android has half his face missing and a multitude of visible cogs whirring around inside his head, and we learn that he is on the prowl for human body parts to replace his own failing internal organs.

As the plot develops and the Doctor becomes more orientated with his new self, the rampaging dinosaur self-combusts, exploding in green flames. The Doctor discovers that it’s not just the dinosaur that has spontaneously burst into flames, but that a large number of Londoners have also been reported to have self-combusted. This leaves the Doctor with a puzzle to solve and brings him into battle with the androids.

The film contains quite a lot of violence, including death. Examples include:

Children in this age group are also likely to be scared by some of the above-mentioned scenes.

There are some sexual innuendo and references in this movie, including:

Some mild language and name calling. Examples include:

Dr Who - Deep Breath is a science fiction drama targeted at adolescents and adult fans of the Dr Who series. As the first in the new series, the main aim of the film appears to be the introduction of Peter Capaldi as the twelfth Doctor. He proves to be a very funny character with a strong Scottish accent, who delivers some very clever and funny lines.  The film seems darker than previous Dr Who episodes and is too scary for children under ten and some older children, so parental is recommended for under 12s.

The main message from this movie is that it’s not outward appearance that makes people what they are, but what’s inside.

Parents may also wish to discuss the portrayal of same-sex relationships in the Victorian period and how things are the same or different today.