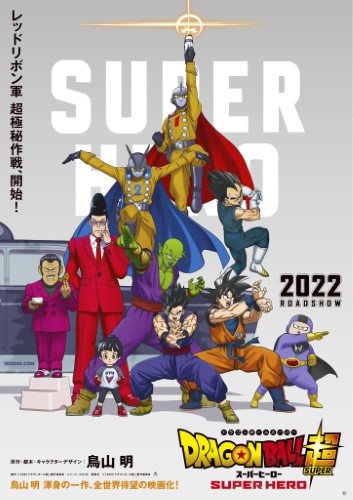 Immediately after being released from prison, Dr Hedo (voice of Miyu Irino in the original Japanese version and Zach Aguilar in the English dubbed version) is recruited by Magenta (voice of Volcano Ota / Charles Martinet), the new leader of his grandfather’s Red Army. Magenta wants Dr Hedo to create ‘Cell Max’, an invincible warrior based on the original villain, ‘Cell’. While Dr Hedo works on Cell Max, he also creates two super-fighter androids, Gamma 1 and Gamma 2 (voice of Mamoru Miyano / Zeno Robinson), both of which are capable of learning battle skills and adapting as they go. Believing Magenta’s lies and believing that he has created two superheroes, Dr Hedo sends Gamma 2 off to attack and kill Piccolo (voice of Toshio Furukawa / Christopher Sabet). Piccolo survives the attack and follows Gamma 2 back to The Red Army’s secret base where he learns of the plan to release Cell Max in a bid to get rid of Gohan (voice of Mosako Nozawa / Kyle Hebert) and everyone opposing Magenta or his Red Army. Meanwhile, Goku (voice of Mosako Nozawa / Sean Schemmell) and Vegeta (voice of Ryo Horikawa/ Christopher Sabat) are training on another planet while Gohan, believing the others to be more than capable of handling any trouble that may come their way, has been busy studying instead of honing his fighting skills. When the plot includes kidnapping Gohan’s three-year-old daughter, Pan (voice of Yuko Minaguchi / Jeannie Tirado), Piccolo cultivates a plot of his own to ensure Pan’s safety, while enabling her father to harness his inner rage and become the legendary fighter whom Piccolo knows is the only one capable of finishing off Cell Max, whose very existence threatens the safety of the entire world.

Dragon Ball Super: Super Hero is an English dubbed anime film based on Akira Toriyama’s Dragon Ball manga series. The film features a fast-paced plot and frequent fight scenes. Due to the content, this is not a family film but one that is likely to appeal to teens, anime enthusiasts and fans of the long running Dragon Ball series.

The main messages from this movie are to work hard and train well; and that in a battle of good versus evil, ultimately good will prevail.