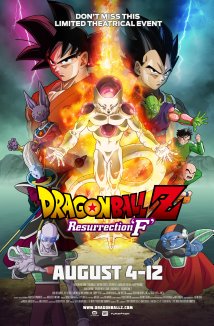 With the defeat of their leader, Lord Freeza (voiced by Chris Ayres), the Freeza army is losing power. In order to regain control of the universe, Sorbet (Jeremy Schwartz) decides to revive his master Freeza using the power of the Dragon Balls. Once restored, Freeza decides to seek revenge on the Saiyan who killed him, Goku (Sean Schemmel). Freeza trains for six months to gain more power and then returns to Earth with his army to seek revenge. But will the Goku and the other warriors on Earth have the power to once again defeat Freeza and his armies? Or will Freeza win and destroy Earth?

Children in this age group are also likely to be affected by the above-mentioned scenes.

Dragon Ball Z: Resurrection F is an action-packed Japanese animated movie which is likely to excite fans of the Dragon Ball franchise and appeal to older children. However, the film glamourizes violence. The characters primarily use violence to solve their problems and this suggests to the audience that violence is an acceptable form of conflict resolution. Because of the violence and coarse language this film is not recommended for children under 8 and parental guidance is recommended for 8-10 year olds. There are characters and scenes that are likely to be quite scary for young children.

The main messages from this movie are that you can overcome your enemies by working together and that good will triumph over evil. Values in this movie that parents may wish to reinforce with their children include dedication and cooperation