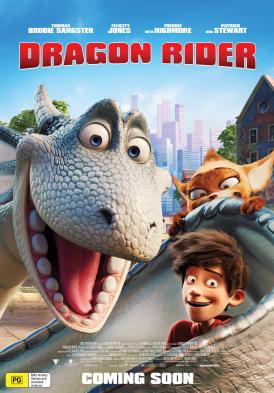 Dragon Rider is an animated movie based on the book by Cornelia Funke. Firedrake (voice of Thomas Brodie-Sangster) is a young, silver dragon who lives in a forest with his family. The forest is fast being destroyed by humans, whom the dragons see as their enemy. Firedrake is sad about his future and sets out, with his forest brownie friend, Sorrell (Felicity Jones), to find the Rim of Heaven, a legendary paradise for dragons.

On their journey they meet Ben (Freddie Highmore), a young orphaned boy who once appeared in movies riding a dragon. Firedrake is certain Ben must by the famed dragon rider and insists he comes with them on their adventure, much to Sorrell's displeasure. Along the way they meet many perils including a fearsome Djinn with a thousand eyes who will answer their questions if they manage to meet his criteria – or woe betide them. Their main enemy, however, is Nettlebrand (Patrick Stewart), a monstrous lion-type creature who loves to devour dragons. Nettlebrand and his sidekick, Twinkles, chase Firedrake and his friends across the world to the Himalayas where there is a final confrontation.

Dragon Rider is an animated adventure movie which lightly touches on themes of conserving the forests for the animals. The movie is fast paced and quite intense in places, which, together with the quite scary creatures, makes it unsuitable for children under 6. Parental guidance is also recommended for 6 – 7 year olds.

The main messages from this movie are to believe in yourself; that not all humans are bad humans; and that good triumphs over evil.