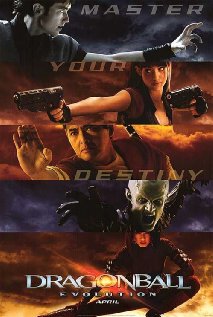 Not suitable under 5, not recommended under 8, PG to 13 (Scary scenes ,Violence)

This story is based on the popular Japanese manga cartoons created by Akira Toriyama. The movie begins with a legend. Lord Piccolo (James Marsters) who wishes to rule the earth and in doing so will destroy it. A group of warriors band together and bind Lord Piccolo into the earth. To do this they use seven magic dragonballs that are then distributed throughout the world.
Goku (Justin Chatwin) lives with his grandfather (Randall Duk Kim) who is training him to be an expert in martial arts. As with all true fighters Goku is told not to rely on his external senses but to rely on what is inside him; to use his ‘Ki’. Today is Goku’s 18th birthday, and his grandfather gives him a sphere, a dragonball. Goku is happy to have it but it does not mean much to him. Goku never knew his parents but tonight at his 18th birthday dinner his grandfather will tell him what really happened.
At school he is considered a geek and a weirdo. He is very keen on a girl – Chi Chi (Jamie Chung) but when he gets to school, his bike is run over by one of the ‘cool’ boys. This group bully him and when he does not fight back it is seen as proof that he is scared. Goku can of course defend himself but does not because he has promised his grandfather he would not fight ‘boys’. Later on when Chi Chi cannot open her locker, Goku does this for her using his ‘Ki’. He tries to hide but she sees him and is impressed, and appears to understand how he did this. She invites him to her party.
Every year Goku and his grandfather celebrate his birthday together. This year however he goes to Chi Chi’s party (without telling his grandfather) and at the last minute takes the dragonball with him. Once he gets there he is again bullied but this time fights back. While this is happening, Lord Piccolo descends on the Grandfathers house and on finding the dragonball missing he attacks the grandfather and destroys the house. Goku feels that there is something wrong and races back to find his grandfather buried in the house. Just before the grandfather dies he tells Goku that Lord Piccolo has returned and that Goku needs to find Master Roshi and the other dragon balls so as to defeat Lord Piccolo. Goku is very sad and guilty that he was not there to help his grandfather.
Goku decides to pursue Lord Piccolo to avenge his grandfather’s death. On the way he is helped by Bulma (Emmy Rossum) who has invented a dragonball tracker after her father’s dragonball has been stolen (also by Lord Piccolo) and hopes to get it back as it will be used as a form of energy. Together they find Master Roshi (Chow Yun Fat) and finally they are joined by a charismatic thief called Yamcha (Joon Park) and these four work together to track the dragonballs.
While this is happening, Goku’s romance with Chi Chi develops and she tries to help him in his desire to improve and perfect his fighting skills. He eventually comes face to face with Lord Piccolo. At this point it is important for him to be true to himself and remember his training as only by doing this can he hope to defeat Lord Piccolo.

The supernatural; death of a family member

Some of the scenes described above could also scare children in this age group.

Some of the scenes described above could also scare younger children in this age group.

Dragonball is an action adventure story based on characters created by Akira Toriyama and featured in graphic novels and a TV series. It is aimed at a teenage audience.
The main message from this movie is that only by being true to what you believe in, can you do the right thing.