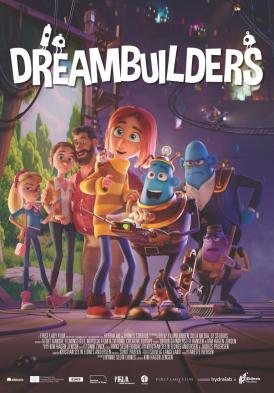 Minna (voice of Robyn Dempsey) lives with her father (voice of Tom Hale) in a quaint house in the countryside. Minna is a bit of an introvert and enjoys being by herself with her pet hamster and playing chess with her dad. Minna’s life is shattered when her dad’s girlfriend (voice of Karen Ardiff) moves in with her daughter Jenny (voice of Emma Jenkins), a girl about the same age as Minna. Jenny is image obsessed and totally addicted to posting about her own life on Instagram and social media. The girls couldn’t be more different. Jenny is horrified to be moving to the countryside and having to share a room with the very fashion UN-conscious Minna and the hamster, who Jenny thinks is a disgusting rat. One night whilst she is asleep and dreaming, Minna accidently comes across a crack in a wall, when she peers through it a whole alternate world is revealed. This is an imaginary world where people’s dreams are ‘constructed’, like plays on large stages. Each person’s ‘dream-stage’ is run by a production team of small blue men and friendly little robots. Minna meets her very own ‘Dreambuilder’; his name is Gaff (voice of Luke Griffin) and he has been designing and producing Minna’s dreams since she was just a baby. Gaff is very fond of Minna, but when he realises that she has broken through the dream stage into the backstage world, he is horrified and worried about losing his job and being demoted. Minna is fascinated by this backstage dream world and realises that she can actually influence how people think in the real world by manipulating what happens in their dreams. Whilst this starts off as a bit of fun, when Minna decides to try and change her bothersome stepsister Jenny and take revenge upon her by manipulating Jenny’s dreams, things start to go horribly wrong and Minna must make amends.

There is some mild romantic activity in this movie, including:

Dreambuilders is an easy to watch animation that tackles the difficult theme of parents separating and blended families in a way that is accessible to children. Parents should be aware that there are some sad moments and a few scary bits that younger children will find disturbing. Best suited for children over 8 with parental guidance to 12.

The main message from this movie is that painful and traumatic events in life can be overcome with good communication and lots of support.