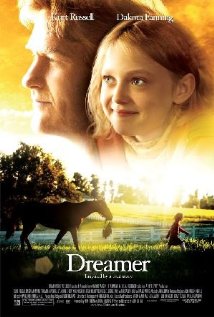 Dreamer is a film about the Crane family who live on a farm in Kentucky surrounded by racing stables. A long time ago the farm had a stable full of horses, but no longer, and now Ben Crane (Kurt Russell), a talented horseman, works for one of the rich stables in the area. Cale (Dakota Fanning), Ben’s ten year old daughter is desperate to go to work with her father, and eventually goes with him to the race track, where she meets the beautiful filly, Sonyadore. Ben recommends that Sonyadore is not fit to run in a particular race, but the owner insists she run anyway and during the race, she falls and breaks her leg. Everyone wants to put her down but Ben wants to save her and is sacked as a result. He brings her home, where Ben and Cale and the other members of the family, Mum (Elizabeth Shue) and pop (Kris Kristofferson) work together with sheer determination, guts and willpower to try to get the horse well again.

The only scene which may upset small children is when the horse falls in the race and cannot get up again. However, very young children may not comprehend what is happening.

Children in this age group may also be disturbed or scared by the scene mentioned above.

The above scene may upset older children as they will be aware that the majority of people want to put the horse down. Also the jockey falls and is quite obviously badly hurt.

Children over the age of thirteen are unlikely to be disturbed or scared by material in this film.

This movie’s message is that sometimes when you have a dream you must have willpower and determination to follow it through. You also need to ‘give it a go’, as even though you may not succeed, it is still important to try