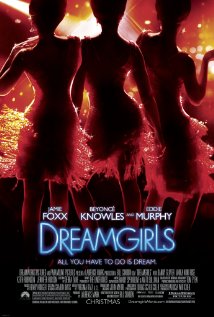 Set in the 1960’s, with a backdrop of racial tension, Dreamgirls tells the story of a rising female vocal group called the Dreamettes. The group consists of Deena Jones (Beyonce Knowles), Lorrell Robinson (Anika Noni Rose) and their powerful lead singer, Effie White (Jennifer Hudson). They are spotted at a talent quest by an ambitious scout Curtis Taylor (Jamie Foxx) who wants to trade in his used car salesman job for a position as their manager. He gets them signed up as backup singers to popular James "Thunder" Early (Eddie Murphy) despite Effie’s protests at having to ‘do backup’.

Effie and Curtis become lovers but he eventually ditches her for Deena whom he places as lead singer because he sees her as more ‘marketable’. The group is renamed ‘Deena and the Dreams’.  Angry and pregnant with Curtis’s child, Effie leaves the group and is replaced by Michelle (Sharon Leal). Her life as a single parent becomes a struggle as she tries to revive her singing career. Curtis marries Deena and ruthlessly dominates and controls her career until she is able to break free from him.

There is some coarse language in this movie, including

Dreamgirls is a musical about the harsh world of pop music; the rise and fall of stars and the devastating toll that takes on them as individuals. It has a great musical score and will appeal to older adolescents.

The main message from this movie is that stardom is not as glamorous as it appears and that it can be quite a tough life.