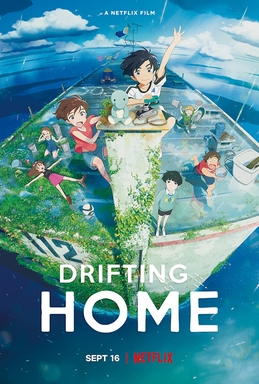 With his old apartment building soon to be destroyed, Kosuke (voice of Mutsumi Tamura) and a couple of friends go to visit the abandoned place and also to see if the rumours about it being haunted by a ghost are actually true. While there, they run into their classmate, Natsume, who used to live with Kosuke and his family, and they are soon joined by an additional two classmates. Embarrassed at being found there, Natsume (voice of Asami Seto) tells everyone about Noppo (voice of Ayumu Murase), another young person who used to live in the building, and they set off to search for him. When Natsume has a fall, something happens and they all find themselves in the same apartment building, only now it is adrift at sea and their city is nowhere to be found. Unable to figure out what has happened to them or how they are going to get back, the group must find a way to work together and to strengthen friendships in order to survive. As they encounter different buildings from their past, also adrift at sea, they venture out to find food and water but find much more than that in the form of powerful memories they are forced to face, to process and ultimately learn to move on from.

Family breakdown; Death of a loved one; The challenges of maintaining childhood friendships through the tween years; Jealousy; Loss; Letting go of the past.

Drifting Home is an English dubbed, coming-of-age, anime movie, containing lots of over the top melodrama and an unusual plot. The film will likely be best enjoyed by tweens, teens and general anime fans.

The main messages from this movie are that eventually you have to let go of the past in order to embrace the future; that everything changes; and that even through heartache and struggle, the most powerful friendships will find a way to survive.