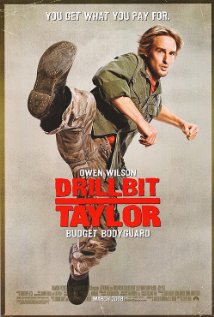 Not recommended under 13, PG to 15 due to the theme of bullying, violence, sexual references, drug references and coarse language.

Wade, Ryan and Emmit are twelve-years-old and tend to stand out in a crowd, Wade (Nate Hartley) is tall and skinny, Ryan (Troy Gentile) is short and overweight and Emmit is the “geek”. The film begins with Wade and Ryan excited about day one of their high school lives. However, the day turns into a total disaster when Wade speaks out against a psychopathic school bully named Filkins (Alex Frost), and as a result becomes the target of the bully himself. When day two turns out to be an even bigger disaster, the trio place an ad in Soldier of Fortune magazine to hire a personal bodyguard.

After interviewing a number of candidates, the boys decide upon Drillbit Taylor (Owen Wilson), an ex army ranger who tells the boys that he was discharged from the army for “unauthorised terrorism”. In fact, Drillbit Taylor is a homeless person who begs for money, lives in the park and showers nude on the local beach.

Drillbit deceives the boys into believing he can teach them army fighting skills that will protect them from Filkins, while in reality he is stealing silverware and iPods from their homes. When Wade receives another beating from Filkins, Drillbit has a change of heart and decides to start really protecting the boys. He dons one of Wade’s father’s suits and goes to school with the intent of keeping a close eye on the boys. However, as soon as Drillbit sets foot in school he is mistaken for a substitute teacher, setting in motion a series of events that allows Drillbit to unleash some payback on the boys’ behalf.

Drillbit Taylor contains frequent violence, some of which is designed to be comical in intent, while other violence is presented in a more brutal manner. Most of the film’s violence focuses on the bullying and intimidation of younger students (twelve-years of age) by older students (eighteen-years of age). The film also contains violence enacted by adult males against other adult males. Examples include:

In addition to the above mentioned violent scenes, children aged eight to thirteen are particularly likely to be disturbed by the level of bullying which occurs and the reaction of parents and teachers to the boys’ requests for help, including the following:

Children in this age group may also be disturbed by the level of bullying and the adult response to it.

Drillbit Taylor contains a number of sexual references including:

Drillbit Taylor contains one instance of mild substance use, and some drug related references. For example:

There is some medium level coarse language and put downs in this movie, including:

Although Drillbit Taylor shows that individuals who stick together and persevere can defeat bullying, the film contains more negative messages than positive. Including:

Parents may wish to discuss these messages and the appropriate ways in which schools, families and individuals can deal with bullying.