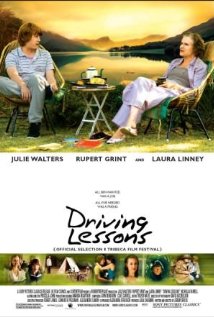 Not recommended under 8, PG to 15 (Moderate coarse language; adult themes)

Seventeen-year-old Ben (Rupert Grint) is the frustrated and repressed child of an Anglican minister and his model Christian wife (Laura Linney). Summer holidays have begun and he has yet again failed his driving test, which he realises is due to the poor teaching skills of mother. Adding to Ben’s woes is his mother’s expectation that he will help her out in all her church duties (including acting as a tree in her church play production), his growing suspicion that his mother is having an affair with the young church deacon, his parents’ strained and tense relationship, and his own inability to communicate with his secret crush, Sarah.
When his mother takes in a vagrant as part of her Christian duty, she asks Ben to get a summer job to help financially with his care in their home. Ben applies for the post of companion to retired actress, Dame Evie (Julie Walters) and, after he gets the job, realises that he has taken on more than he can handle. Evie’s exuberant take on life and her ‘devil may care’ attitude are both a shock and an eye-opening experience for Ben. In Evie, he finds someone who appreciates his poetry and in Ben, Evie finds a good friend.
When Evie decides to go on a camping trip, Ben agrees (under duress and as he points out, without a licence) to drive Evie. Having begun to break the rules and constraints placed on his life by his mother, Ben takes the even bigger step of going on a road trip to Edinburgh for what might be Evie’s last performance.

Driving Lessons is a coming of age road movie about an unexpected friendship and living life with no regrets.