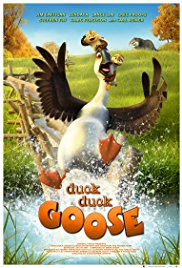 Not recommended under 5, parental guidance recommended to 8 (some violence and scary scenes)

Duck Duck Goose is a Chinese-American production. It is an animated adventure movie set against the backdrop of the stunning autumnal Chinese countryside. Peng (Voice of Jim Gaffigan) is a young, overconfident, and immature gander who loves to show off and cause problems amongst his flock. He is sure that it’s better to fly on your own, rather than in formation. To prove his point, he decides to hold back when the flock begin their yearly migration south to escape the winter, with the intention of going it alone and racing them to the destination. However, things don’t go quite to plan, and Peng is forced to make the journey south on foot. Along the way, he is adopted by a winsome pair of orphaned ducklings, Chi (Voice of Zendaya Maree Stoermer Coleman) and Chau (Voice of Lance Lim) who have been separated from their own flock. The trio are spotted by a villainous, crazy-eyed stray tom cat who decides they look like a good lunch for a hungry cat. The journey south is a madcap and perilous adventure, with the tom cat in hot pursuit. Throughout the journey, Peng finally learns the value of sticking with your flock and gets in touch with the better side of his nature.

Strength in numbers; families and friendship; sticking with the group; team work; collectivism versus individualism; putting others before yourself.

Duck Duck Goose is a standard tale of adventure with a strong moral theme running throughout. The animation is superb and it’s worth watching simply for the stunning visual backdrop of the Chinese countryside in Autumn. Children will love the silly fart jokes and the storyline is engaging enough to keep everyone happy.

The main messages from this movie are that men can be just as good at caring for younger creatures as women, and this is nothing to be embarrassed about; and that going it alone is not the way – we need our family, our friends and our community (the flock) for survival.