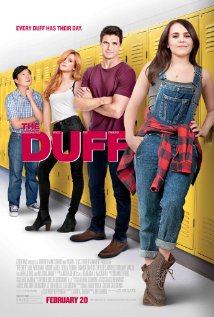 Not recommended under 13; parental guidance strongly recommended 13-15 due to themes, sexual references and coarse language

The DUFF is an American teenage comedy that follows the story of Bianca Piper (Mae Whitman), an intelligent and charismatic teenage girl who feels as though she has to conform to society’s ideal standards of beauty. Bianca and her two friends Jess (Skyler Samuels) and Casey (Bianca A Santos) are enjoying their senior year of high school when Bianca’s world is turned upside down at the revelation that she is the ‘DUFF’ of her friendship group - the Designated Ugly Fat Friend, or the person who is the least popular of any given social group. She discovers this at a party when talking to Wes (Robbie Amell), her neighbour, former friend, and star of the football team.

Desperate to change her social standing and go out on a date with her crush, Toby (Nick Eversman), Bianca strikes a deal with Wes in which she will help him pass his school exams, whilst he teaches her how to escape the title of DUFF. The results are not quite what she is hoping for.

There is limited violence within the film, including:

There are some sexual references in the film, including:

There is some partial nudity and sexual activity in the film, including:

There is some use of coarse language in the film, including:

The DUFF is a funny and inspiring movie about flouting the social stereotypes that define and constrain people. It follows Bianca as she transforms from an individual who is crippled by the image of person she wants to be (someone who is popular, attractive, and liked by everyone) to the independent and intelligent person she really is. The film touches on issues such as social stereotyping and bullying, as well as the devastating impact that both of these may have upon the psychological wellbeing of young people. At the same time, the film shows that people can often transcend their original beliefs and grow as people.

Some parents may feel that the themes, sexual references and coarse language make the film unsuitable for under 15 year olds, but it raises a number of issues which other parents may wish to discuss with teenagers, so parental guidance is strongly recommended for children aged 13-15.