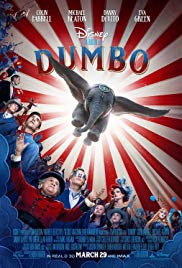 Not recommended for children under 8 and parental guidance to 11 (scary and emotionally distressing scenes). Parent caution: this film may be distressing to young children as well as older children who are sensitive to themes of parental separation and animal cruelty.

Dumbo is a live action adaptation of the original 1941 Disney animation, directed by Tim Burton. The year is 1941 and the scene is set with the Medici Brothers circus travelling the length and Breadth of America. They have been hit hard by World War I and a deadly outbreak of Influenza which has left them thin on acts and thin on audiences. Circus owner Max Medici (Danny DeVito) has gambled on the purchase of a pregnant elephant, hoping that a cute baby elephant is going to draw some big crowds. Much to his horror, when the baby elephant is born, it has enormous, long, flappy ears – an abomination! In anger, Max sells the mother elephant and baby ‘Dumbo’ is left all alone. Returned war veteran, Holt Farrier (Colin Farrell) oversees caring for the circus elephants; and his two young children, Milly (Nico Parker) and Joe (Finley Hobbins) take pity on little Dumbo and comfort him. They have also lost their mother to Influenza and can empathise with the elephant’s fear and despair. As they cheer up Dumbo; cuddling, feeding and playing with him; they notice that Dumbo’s ears have an extraordinary and magical ability – they allow the baby elephant to fly! At first nobody believes them, but one day Dumbo takes flight and amazes everybody. As word travels of the amazing flying elephant, a distant theme park owner, V.A. Vandevere (Michael Keaton), decides that he needs Dumbo to perform in his own circus. He convinces Max Medici that a collaboration would be a good idea. Seduced by the promise of fame and fortune, Max agrees. Although it all seems too good to be true in the glamourous ‘Dreamworld’ theme park, the pressures of performing; the growing desperation of Dumbo to escape and be reunited with his mother become too much, proving a disastrous adventure.

Death of a parent; separation from a parent; animal cruelty and animals in captivity; being different from ‘normal’; war.

Younger children, and sensitive children in this age group are still likely to find many of the above-mentioned scenes very emotional and sometimes scary. Parents are advised to use their discretion about the suitability of the content for their child.  In addition to the above-mentioned violent scenes, there are some scenes in this movie that could scare or disturb children aged eight to thirteen, including the following:

Nothing of concern for this age group, however children with personal experience of death of a parent or separation from a parent may find this film emotionally distressing.

There is no use of substances in this film.

The original Disney animation Dumbo was a sad story, and Tim Burton captures the darker side of the original animation well, with signature visual grittiness and quirkiness. At the same time, there is a lovely happy ending and the film has some powerful messages about loss, compassion and being different. Parents should know that this is not a film for very young children, as the themes of parent separation, death and animal cruelty are central to the story and could be very distressing. Discretion is advised as to whether older children will enjoy the darker, more frightening elements of the film; whether they will find it distressing; or just not much fun.

The main messages from this movie are that being different is not something to be ashamed of and that animals deserve our compassion.