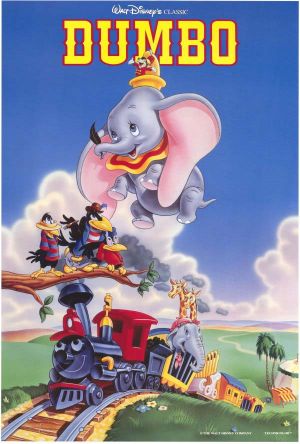 Not suitable under 5; parental guidance to 6 (sad/disturbing scenes and themes (separation from parent, emotional cruelty), tobacco and alcohol consumption, and dated stereotypes)

Mrs Jumbo is the happiest circus elephant in the world when a stork delivers her a long-yearned-for little baby elephant, whom she names, Jumbo Junior. The other elephants are in awe with the adorable little bundle of joy – until he sneezes and unfolds a set of enormous ears. The other elephants laugh at him for being a "freak", and from then on call him Dumbo. Mrs Jumbo does not care, however, she loves her little baby just the way he is. Unfortunately, the conceited elephants are not the only ones who ridicule Dumbo for being different, and when children in the crowd harass Dumbo, Mrs Jumbo, wanting to defend her baby and punish the bullies, loses her temper. Declared a dangerous, mad elephant, Mrs Jumbo gets separated from Dumbo and is locked up in a cage, leaving poor Dumbo desperate and all alone. Gladly, Timothy the Mouse (voiced by Edward Brophy) understands how unfair and cruel everyone behaves, excluding Dumbo for being different. He is determined to show Dumbo that his big ears should not stop him from finding success and acceptance. And indeed, it turns out that Dumbo's ears are a blessing rather than a curse, when it ends up that he is the world's only elephant that can fly.

Dumbo is one of the early animated Disney classics, first released in 1941. Its main themes – bullying, discrimination, and excluding someone for being different – are as current as ever. Much of the film has a rather sad notion, and extremely emotionally intense and heart-breaking scenes may be a bit too much for young and/or sensitive viewers, which is why parental guidance for those audiences is recommended. Modern viewers may feel that the movie contains some character depictions – a flock of black crows speaking in a very stereotypical African-American slang – which, according to today's standards, represent racist stereotypes. Parents can use this as an opportunity to raise awareness of how society and the understanding of stereotypes and racial discrimination have changed over the decades.

The main messages from this movie are that being different does not justify discrimination, and that it is important to believe in oneself and celebrate one's uniqueness rather than feeling shameful.