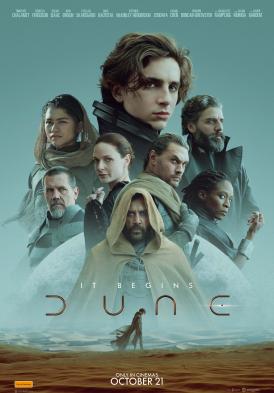 Not suitable under 12; parental guidance to 14 (violence, themes, scary scenes)

Paul Atreides (Timothee Chalamet), son of the Duke of Caladan (Oscar Isaac), dreams of a distant planet called Arrakis. He sees the endless waves of sand and the spices that float in the air of this dry and desolate place; he sees the cruelty of the Harkonnen who ravage the land and abuse the native Fremen; he sees the greed of the Harkonnen grow in their desperation to control the spice trade, the most valuable substance in the universe; he sees the Fremen warriors try and fail to rid themselves of their oppressors; and he sees a beautiful, mysterious, warrior (Zendaya) leading him through these dreams. When the Emperor sends word that the house of Atreides has been tasked with bringing peace to Arrakis, Paul hopes to help his father bring change to the oppressed planet and govern respectfully. Little do they know that, fuelled by jealousy of the respect and success they have had on Caladan, they have been sent to Arrakis to fail. When the Imperial army joins forces with the brutal and ousted Harkonnen they return to Arrakis with the intension of not only killing off the last of the house of Atreides but of exterminating all the Fremen as well. Meanwhile, with the help of his mother Lady Jessica (Rebecca Ferguson) and her witchlike powers, Paul finds himself at the centre of an ancient prophecy about a young man who will come to Arrakis to save their people and lead the universe into a time of peace.

Dune is a science fiction, fantasy film with an excellent cast and a well-developed storyline. Due to the violence and themes it is not a family film but one that will best be enjoyed by teens, mature audiences and sci-fi adventure fans.

The main messages from this movie are that we must rise above fear; that dreams are messages from the deep and that we should not underestimate their power or influence; that greatness is not a destination you achieve but rather a journey you undertake; and that the most powerful asset a kingdom can possess lies in the unified strength of its people.